Menu
Log in
Register
Install the app
You are using an out of date browser. It may not display this or other websites correctly.
You should upgrade or use an alternative browser.

Compatible With
Any Android-x86

GearLock is a command line program to help you customize & install custom software in your android-x86 OS. It has the capability of running in both GUI and TERMINAL with a early-recovery mode. GearLock has been a part of DarkMatter project until now, but I decided to make it universal for any android-x86 OS

You can control the behavior of GearLock early recovery screen with boot-flags.
There are three kinds of flags you can use

This helps you bypass the recovery countdown screen. You can either put NORECOVERY=0 in your grub-config or make a file named norecovery in your android-x86 partition​
Grub config example:​
C-like:
​
ALWAYSRECOVERY​
This lets you to auto-enter recovery mode always* without having to press ESC.​
Just like NORECOVERY, you can active this by grub (ALWAYSRECOVERY=0) or by making a file named alwaysrecovery in android-x86 partition​
​
FIXFS​
This will auto-fix extFS on each boot from the option which you find in recovery mode.​
Grub> FIXFS=0​
File-Flag> fixfs​
​
NOGFX​
When this flag is found, GearLock does not attempt to get the best possible visuals during RECOVERY-MODE. There are some really rare cases among some users in which when GearLock tries to ensure better visuals, kernel panic happens during boot.​
Grub> NOGFX=0​
File-Flag> nogfx​
Developer Documentation

In simple words, GearLock brings a whole range of pure linux utilities. Which includes bash, python, coreutils, nano and more ! (Runs system independently, meaning even if you delete the whole system these are still executable)

Not only that, let me introduce you to GearLock-Dev-Kit. GDK is the thing which you can use for building such package/extension. There is also a ready-to-use kernel package-template alongside custom-core package for making extensions and so on.

Hit the next page! 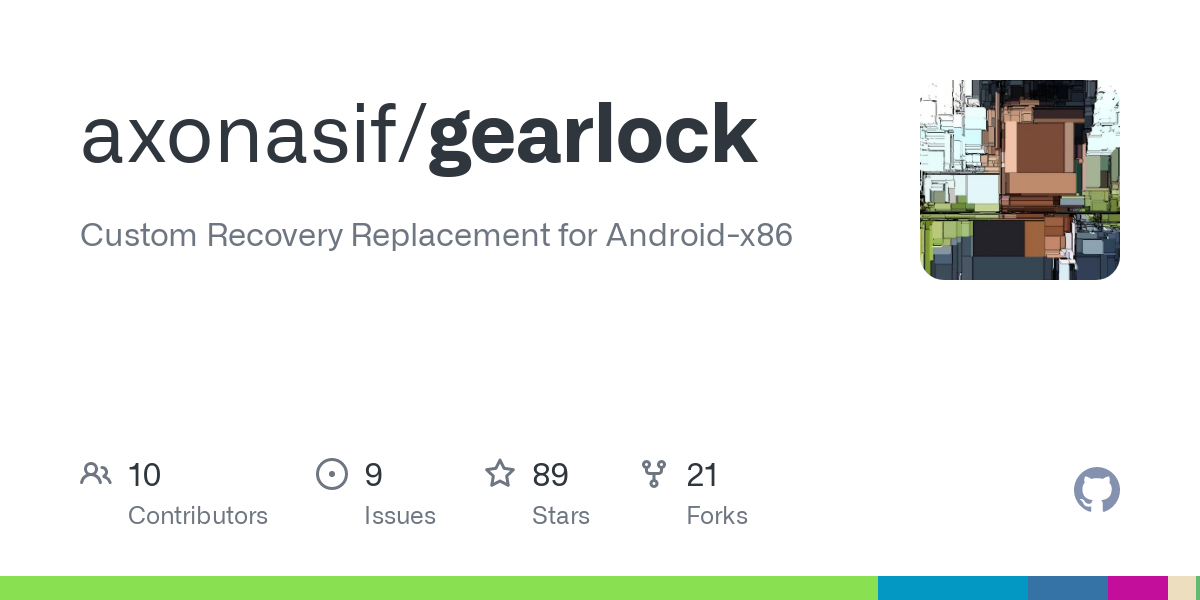 Custom Recovery Replacement for Android-x86. Contribute to axonasif/gearlock development by creating an account on GitHub.

So here we gonna learn ways of installing GearLock in your desired android-x86 system.

If you want my honest word then you should know that about 99% of the available flashable zips out there will likely fail since they were never made for android-x86 and GearLock has nothing to do about that. In which most of them are flashable-roms which you obviously won't be installing on android-x86. Currently I've had success with OpenGapps and a few other zips. Other than that will surely fail unless the developer itself implements android-x86 support.

First of all I'd like to thank everyone in our community because without you guys I wouldn't be able to do such stuffs. It's been a pleasure to be a part of this community. Thank you.

Special thanks to @HMTheBoy154 & @Night & @mido.fayad for bringing some awesome GearLock package & extensions alongside helping the community in various issues in their free time. They played a big role in this community They've been always there in the time of need.

Thanks to the beta testers : @AngusX , @dabombUSA , @Fazeel.abbas2 , @P.B | D.B , @Kenny
Thanks to everyone involved into the Android-x86 Project, because without it GearLock wouldn't exist...

Some last words from me

I never thought I'd be able to do such stuffs before, it's been an honor. More importantly, I really wanna thank android-x86. Because of it I could also learn a lot, yes and that includes some funny people also
It hasn't been easy to keep up till here. Required a lot of patience and hard work to make it here.

Don't forget to submit your review if you can
Reactions: hiperred, prehistoric, Veselchak and 36 others

OS: Androidx86 4.4 (kitkat)
please help...
Thanks.
Upvote 0 Downvote
Very cool
Upvote 0 Downvote
all links give me error download plz update links
Upvote 0 Downvote
It does not work in legacy mode bios only UEFI mode sends me an error when booting Android x86 + gearlock sdk error can be fixed for legacy BIOS mode this error
Thanks:)
Upvote 1 Downvote
IDK why spigotmc,polymart etc have the same template as this website or viceversa
Upvote 0 Downvote
Jg
Upvote 0 Downvote
so far so good. this is weird for now, darkmatter 4.7 beta. i can't see/do gearlock options after launching the console app (Just blank window/not showing gearlock menu). but i could to use it from gearlock recovery mode. however, i can't do install/update gearlock version, because i'm gonna using panda keymapper. when installing panda keymapper extension, the console just tell me to update your newer gearlock version first to install this extension. the facts, i can't install newer version of gearlock
Upvote 0 Downvote
wait why gearlock app missing after update 7.3.3 and i cant alt-f8
Upvote 4 Downvote
Darkmatter 4.7 beta2 bootloop after updating gearlock to 7.3.3
Upvote -1 Downvote
Theres only two Governors present for Dm 4.6 in gearlock. Plz add other governors too l=like in DM 4.7

AXON
This is not affilicted with gearlock, you should create an issue at the darkmatter repository
https://github.com/supremegamers/darkmatter/issues
Upvote 0 Downvote
Read more…
Top